Most frequently used rubber belts are standard EP antibrasive belts with three or four textile linens.
These belts have wide usage: in quarries, gravel pits, harbours, cement and lime factories, and generally in transport and separation of bulk materials.


Metso Minerals EP textile belts are made of highly abrasive materials such as rocks, coal, sand etc. rubber is antistatic, antiabrasive and electrically non-conducting, and linens are designed to provide elasticity at impacts as well as strength up to 25% higher than standard! All belts are made according to ISO and DIN standards and have rubber sealed edges. 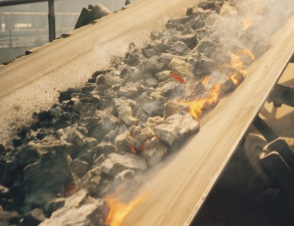 Temperature belts are designed for the transport of hot material with constant temperature from 130°C to190°C with the maximum short-time temperature up to 250°C. They are most frequently used in cement factories, steel-mills, thermal power plants, and are intended to transport clinker, raw materials, coal, slag, ash, sand and metal parts. Besides temperature resistant belts there are also fire resistant and self-quench belts. Breaking strength of these belts can be: EP315/2, EP400/3 or EP630/4. 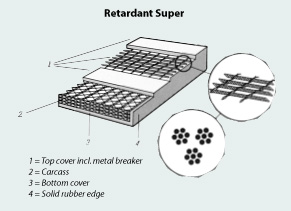 All belts are manufactured from textile EP linens, and Retardant Super has three textile linens and a steel wire as a protection for linens.
Send inquiry Download catalog 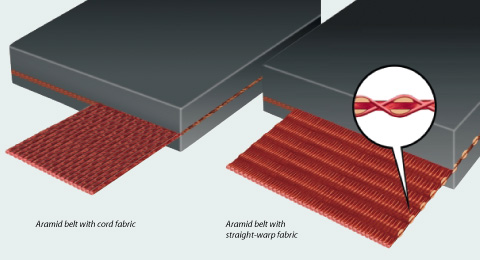 Aramide belts are rubber conveyor belts with aramide linens that are as light as textile but as strong as steel, and with minimal stretching during work. They are especially persistent to temperature and chemicals.
The advantages of these belts are also lesser weight and large breaking strength from 630 to 2500N/mm that allow functioning in extremely difficult conditions.
Send inquiry Download catalog

Metso Minerals rubber belts with steel wires are specially designed belts, and they represent the very top in the development of the conveyor belts. There are two basic types of belts :

Considering the way of wire knitting and rubber type, different strength, elasticity as well as impact and stretching resistance are determinated. Therefore, these belts are used in all operating conditions.

The particularity of this belt is a large breaking strength from 500N/mm to 3150N/mm and the ability to work with smaller diameter pulleys.
Send inquiry Download catalog

FLEXOVEL elevator belts for transport of material up to 90° 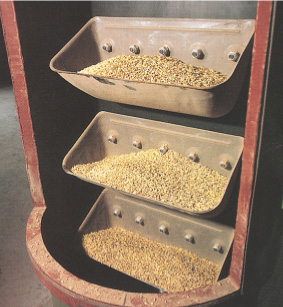 FLEXOWELL belts are specially designed for transporting large quantities of materials sized from 0 to 400mm in all directions: vertically, horizontally or angled from 0° do 90°. Just one belt can transfer material in height up to the 500m. During work it can take various forms: S, L, I, O or rotate to 180°.

The belt consists of base belt that, unlike other manufacturers at METS MINERLSA, is not made from a standard EP belt, but from XOE or XST belt which is highly resistant to stretching, longitudinal as well as transversal. Transversal and longitudinal ribs are combined with the cold vulcanization process and then anchored with screws and are equipped with textile reinforcement to promote long-term durability of belt.

This belt is usually used for transshipment of coal, cement, iron ore, for loading and unloading of ships, loading of the silos or simply on the horizontal belt-scales.

This belt can be manufactured in a special version as a "pocket lift" with rubber pockets or in a version without the side and cross tires, but with metal crates.
Send inquiry Download catalog 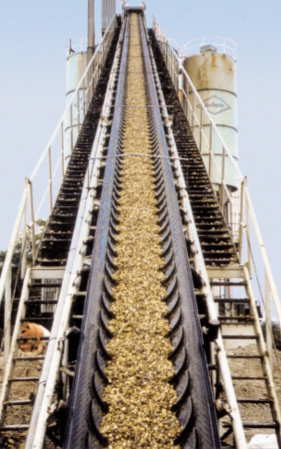 Escort belts are used for transporting material with an angle from 18° to 45° and selection depends on filling diameter of materials and on the ascent degree of conveyors. For angles greater than 45° FLEXOWELL belt is recommended. Typically, these belts are manufactured same as EP250/2 or EP400/3 but with the additional U or V profiles.

On the market there is a large number of differently designed escort belts and, therefore, it is necessary to measure the width of stripes and ribs before order or installation.


A special segment of escort belts are so called Profiled belts. Profiled belts are designed especially for the transport of various types of wood, wood logs, sawdust with an angle from 0° to 30°.
Metso Minerals manufactures four types of these belts: NASTA, NAPPULA, RIPA and PYRAMID.

- ANTIOIL G is a belt designed for use in case of the appearance of highly aggressive mineral oils.

- TRELEX oil-resistant type GP is the belt that is used in sawmills and paper factories, and is especially suitable for vegetable origin oils and fertilizers.

- PITCH&PINE GPP is a belt that is usually used to transport wood pieces - logs. Belt is oil and resin resistant.

- TRELEX XP3 is a special oil-resistant belt of bright color in order to emphasize the contrast in relation to the timber that transports.

It is highly resistant to impact because it is reinforced with 4 or 6 linens.

- GAK Belts is the belt that is used when there is a danger of explosion like in silos or during the sugar transport.

Belt is resistant to oil, grease and fire. It is antistatic and made according to standard ISO284 or ISO340.
Send inquiry

Enclosed transport of material is excellent and environmentally the most acceptable mode of material transport. Therefore, there is no surprise in the growing customer interest for this innovative project called FLEXOPIPE.

The advantages of the enclosed material transport are :

- ability to transport the material under the horizontal and vertical angles, literally in all directions, between work units and avoiding the configuration of the terrain
- material is protected from rain, snow and wind and the levels of dust and the loss of material are reduced to zero, which is particularly important for powdered materials,
- ability to link multiple units because the belt can open and close at precisely specified locations during the work,
- reduced maintenance costs,
- reduced noise level. Etc.

If you are interested in this conveyor please contact us and our engineers will come to measure the state and propose a quality and long-term solution.
Send inquiry Download catalog
Contact
Mario Kojundžić
Tel:021/382-438 lokal 5.
Fax:021/382-439
Gsm:098/360-934
Email:eurotim@st.t-com.hr